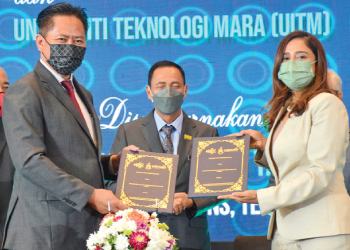 The programme aims to foster innovative development to shape Sabah's economy and encourage research and development (R&D) in the field of Science, Technology and Innovation (STI).

Through this IoT sandbox, it is expected that youth will be encouraged to participate in testing new products and technologies that can boost the nation's economy, increase public and private sector productivity, and indirectly contribute to the STI culture, while creating more high-skilled jobs.

Sabah Science, Craft and Innovation Minister Datuk Yakugan said the launch of the Digital IoT Sandbox is part of a flagship programme under the Sabah Progress and Prosperity Programme to promote STI culture in the Sabah community.

"The Digital IoT Sandbox will be a platform for digital innovators and entrepreneurs to produce products and then test their viability," he said at the Sandbox IoT launch here today.

He said the surge in industrial IoT applications in Sabah is expected to contribute RM9.8 billion to the state’s total revenue in 2025. (060)

Sabah is expected to have better internet connectivity by the end of the year as the National Digital Infrastructure Plan (Jendela) is completed on schedule.

Sabah Science, Technology and Innovation Minister Datuk Yagugan also assured that the National Digital Infrastructure Plan project will be completed by the end of 2022.

"At the moment, everything is going according to plan and we will wait until the end of the year. Hopefully it will solve the internet problem in Sabah. The state is currently at 85 per cent internet coverage," he said.

Yegugan said this at a press conference after attending the sandbox IoT launch ceremony here today. It is understood that Sabah is on track to achieve 91% internet coverage by the end of the year, with a target of 100% coverage by 2025.

At the same time, he also admitted that there will be internet outages in several areas due to the upgrade works as the 3G network has been disabled and upgraded to 4G. There will definitely be interruptions during the (lift) process. (060)

(This newspaper reported on the 1st) Malaysian Crafts, Science and Innovation (MOSTI) Minister Datuk Seri Aham Baba said that East Malaysia is the first pilot Digital Internet of Things Sandbox Pilot Program (Sandbox Internet of Things), It is expected to change the lives of Sabahans through the use and development of technology.

"Digital jobs will benefit sectors such as services, agriculture, mining and tourism," he said.

He said this when officiating the launch ceremony of East Malaysia's first Digital IoT Sandbox Pilot Program (Sandbox IoT) held here today. He did not attend, and his speech was read by the permanent secretary of the ministry, Dato Zaina Abidin.

He noted that the IoT Sandbox will serve as an integration hub for IoT-based solutions, equipped with support services and facilities, such as interoperability testing and development of IoT products and services. One of the first impacts targeted by the IoT Sandbox was the development of 20 proofs of concept by implementing 50 capacity building programs involving local communities.

"The adoption of IoT applications is in line with the central government's initiative to adopt Industrial Revolution 4.0 (IR4.0) in various key sectors across the country," he said.

He added that through IoT, related companies can automate operational processes, which will directly reduce labor costs. It can also reduce waste and improve service delivery, increase competitiveness by reducing the cost of manufacturing goods, and increase transparency with customers.

He said the IoT Sandbox is part of the National Technology and Innovation Sandbox (NTIS) programme under MOSTI.

At the ceremony, a memorandum of understanding was signed between KSTI and the University of Mara Sabah, as well as KSTI and the Malaysian Accelerator Research Centre for Technology and Innovation (MRANTI). The collaboration between MRANTI and KSTI will focus on supporting the commercialisation of local technology practitioners and in turn creating new economic opportunities for the people of Sabah by creating high-skilled jobs. (060)