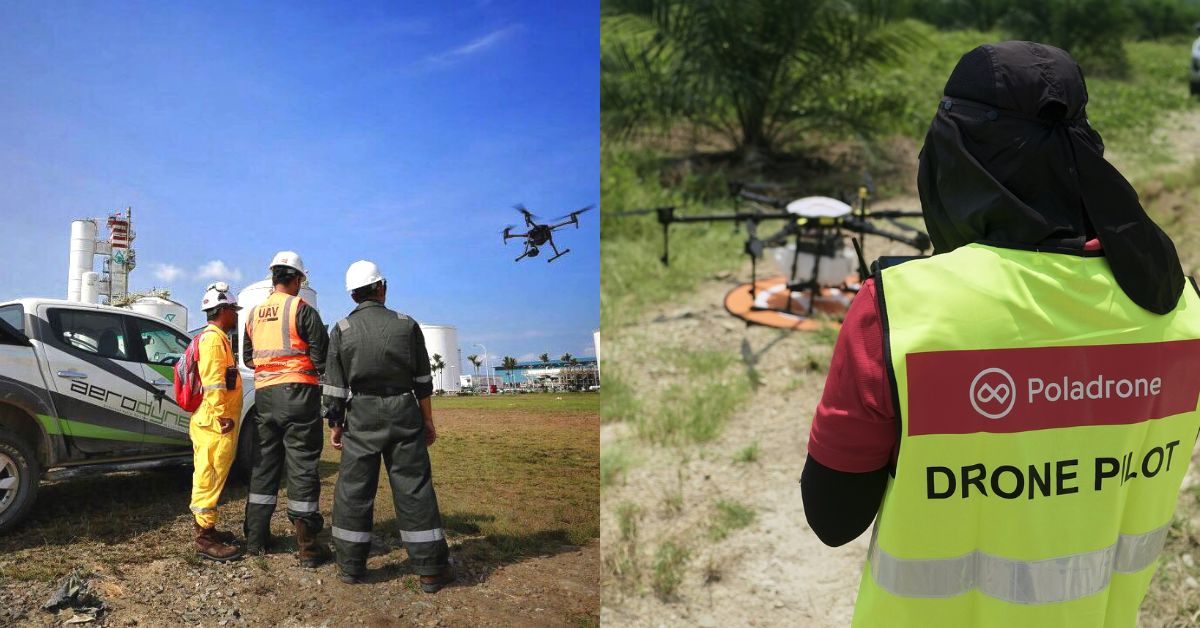 Over the years, Malaysia has fostered a rather robust ecosystem of dronetech startups.

In an interview with TechNode Global, the CEO of Malaysian Research Accelerator for Technology (MRANTI), Dzuleria Abu Bakar, said the market for drone revenue is expected to double to US$17.9 billion in 2025 in Asia.

Clearly, the growth in drone technology is not slowing down anytime soon. So, to be in the know, here are some of the big dronetech names locally that you should know about.

Having started as a drone division of a media company in 2006, Aerodyne Group is now easily one of the biggest names in dronetech not just in Malaysia but across the globe.

After all, Drone Industry Insights ranked the Malaysia-based company first in the world in its Drone Service Provider Ranking 2021.

The company’s top executive told Nikkei Asia in April that Aerodyne aims to raise up to US$200 million next year, with plans for a planned public listing within the next three years.

According to its Facebook page, the company has employed over 900 drone professionals, managed more than 560K infrastructure assets with 458K flight operations, and surveyed over 380K km of power infrastructures across 35 countries.

Beyond these figures, the company has also assisted in search-and-rescue missions during the floods.

Just weeks after those efforts, it announced the inking of a strategic partnership with Norway-based dronetech company, Astralution, to drive growth.

If you’ve been involved in the dronetech scene for a while, you might be more familiar with the name Poladrone, but the homegrown company has just recently rebranded as Aonic.

In an article with Business Today, founder and CEO Cheong Jin Xi said Aonic was chosen in reference to aeonic, which means lasting for an aeon. Furthermore, Aonic is a “near-anagram” for the word ‘action’.

Along with the name change, Aonic has also introduced a new retail vertical to its business. Now, it will serve potential customers by selling drones and spare parts on ecommerce platforms, its own web store, and in brick-and-mortar centres throughout agricultural towns in Malaysia and Thailand.

The dronetech startup was established in 2016 to provide services related to automation and analytics. Now, it’s best known for its spraying drones used in agriculture.

In 2021, Aonic, or Poladrone at the time, is also known for having raised Malaysia’s largest round of seed funding, backed by Singaporean venture capital company, Wavemaker Partners. To be specific, the startup raised US$4.3 million.

The startup has expertise in drone asset management and inspection, drone surveying and mapping, drone training and development, drone security and surveillance, and drone photography and videography.

In an interview with Disruptr, the startup’s CEO, Razalee Ismail, said that oil palm plantations in Malaysia had suffered from labour shortages during the pandemic.

With its expertise, Meraque was able to help with this through its hybrid drone spraying for agriculture alongside its precision agriculture software solution.

This effort shows that they’re not only expecting but also facilitating growth within the drone industry in Malaysia.

A drone and unmanned aerial vehicle (UAV) solutions provider, VStream Revolution focuses on drone sales and services, autonomous drone security and surveillance, counter-drone or anti-drone solutions, and other services such as mapping, sectioning, and training.

According to Technode Global, VStream is also a pioneer in drone insurance in Malaysia. As such, the company is participating in the Drone Logistics Ecosystem, a global organisation creating a confidential business-friendly environment for its members.

Along with the aforementioned Meraque Services, VStream Revolution was reported to be working with AirAsia last year in its pilot project for urban drone delivery services.

During the floods last year, the two drone operator companies also helped out MOSTI as part of the PTK2Dron task force.

Out of a pool of over 500 applicants, the firm was also one of the 33 startups selected for MOSTI and Cradle’s MYStartup accelerator. This hints at VStream’s potential for further growth.

Like the other names listed so far, Malaysia-based MATA Aerotech also offers a range of various drone services.

From aerial imagery and agriculture spraying to emergency and disaster response and 3D map and modelling, MATA Aerotech considers itself a full-service organisation.

According to an article by Digital News Asia (DNA), MATA Aerotech is a joint-venture by Nexus Union Sdn Bhd and Taiwan-listed Geosat Aerospace & Technology Inc, a UAS and robotics technology firm.

The MoU outlined the two parties’ intention to incorporate drone technology into the management and operations of Felcra’s plantations.

Other than these five names, there are still plenty of drone-related companies popping up in Malaysia, many of which are worth keeping an eye on. But big names such as these ones are certainly leading by example.

As drone technology continues to grow locally and abroad, our dronetech companies will hopefully be able to bring Malaysia to even greater heights (pun intended).