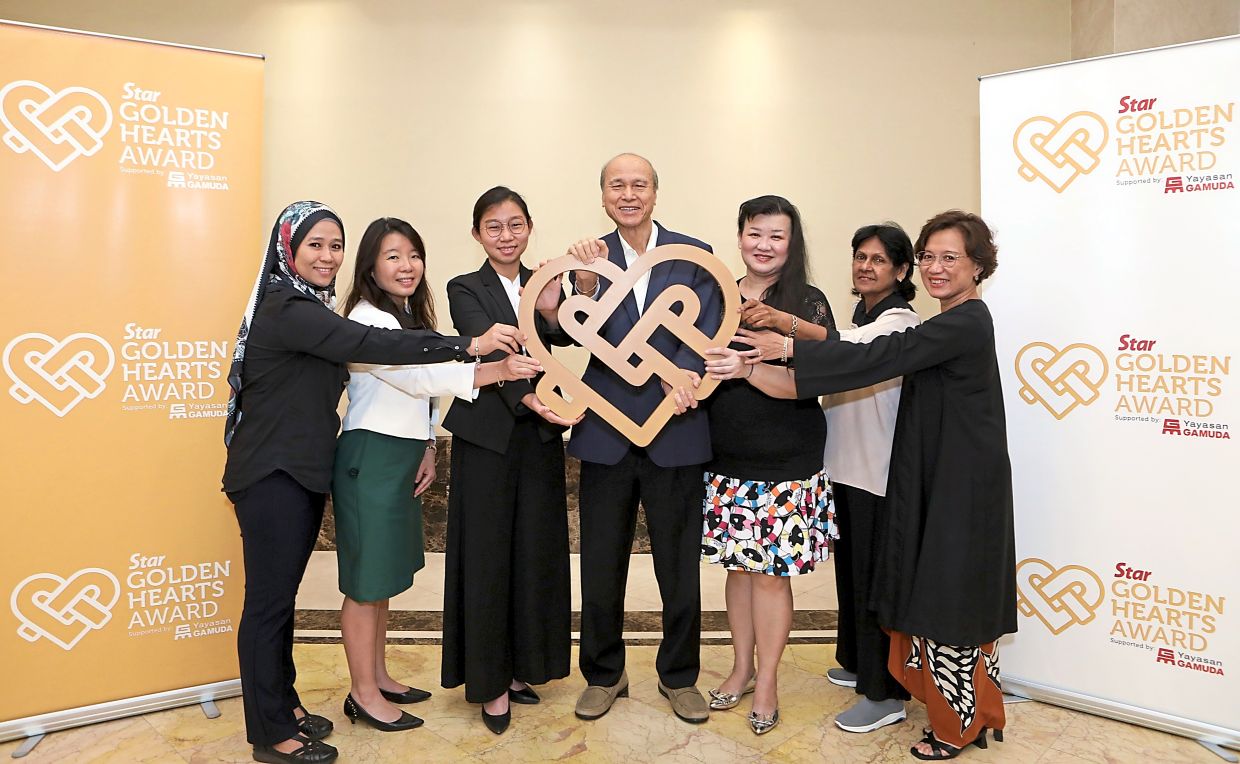 PETALING JAYA: Higher nominations for the Star Golden Hearts Awards (SGHA) this year saw the panel of judges having a tough time selecting the cream of the crop.

With the nominees encompassing every level of civic duty, they said the quality and sustainability of each initiative were among the main parameters in choosing the winners.

With a total of 776 nominations received, chief judge Tan Sri Lee Lam Thye said the nominees comprised a good mix of individuals, organisations and groups from all over Malaysia committed to making a difference.

“Some nominees respond directly to pleas for help. Some conduct well thought out and innovative programmes to provide long-term solutions.

“Whatever they do, these nominees have one thing in common – a kind and sincere heart to support and uplift fellow Malaysians, irrespective of their backgrounds,” he said during the final judging session held recently at Menara Star here.

Lee said he hoped the winners would use the award prizes and exposure presented under SGHA as a launchpad to something bigger and more impactful for the country.

“Initiatives such as SGHA serve as a good reminder to Malaysians of how important unity is and how we can flourish as a country when we band together for the common good.

“I sincerely hope that Star Media Group (SMG) and Yayasan Gamuda will continue with this laudable effort for years to come,” said the Alliance for Safe Community chairman.

SMG chief content officer Esther Ng said she was impressed that there were younger groups of nominees among this year’s unsung heroes.

Ng said it was also their duty to recognise these unsung heroes since The Star is keen on human interest stories as “we are the people’s paper”.

“We (The Star) are very big on carrying the people’s stories to our readers. Year in and year out, there are very interesting types of nominees.

“As the years go by, it is getting more and more difficult for the panel of judges to choose the best of the crop.

“These unsung heroes are getting younger and their initiatives are more encompassing,” she said.

She added that in her judging criteria, what struck her the most were originality and uniqueness in striving towards their cause.

Ng urged the nominees who did not win to keep up their good work, describing them as “all winners”.

“Please continue what you are doing, even if you do not win, because it is not that you are not good but that the competition is stiff.

“To even be selected is something and puts you in a different league.

“They are all winners to me. From judging, I learned that there are so many good people out there and it is our duty to recognise and reward them,” Ng said.

Yayasan Gamuda head Ts Lim Hui Yan said in selecting the winners for SGHA, one key criteria was to evaluate the spin-off effect of the cause to communities or the environment and animals.

“We want to see how these causes have a good and positive impact on the community and how their good work can have a spin-off effect on communities, the environment, animals or simply anything.

“Most importantly, it needs to have a positive impact and the capacity to scale up and benefit more in the long run,” she said.

Lim, who was involved in every step of the selection process, said they received very good nominations this year and that there were more people doing a lot of great work and reaching out to more communities.

“Since Yayasan Gamuda has been a longstanding partner of SGHA for the past seven years, it is important for us to continue this initiative to make a positive impact in people’s lives.

“Both SGHA and Yayasan Gamuda want to have a positive impact on society, so our goals are certainly aligned and we are very confident that we can do much more,” she said.

Universiti Malaya professor of medicine and infectious diseases Prof Datuk Dr Adeeba Kamarulzaman said the increasing number of nominations reflected the great number of do-gooders the country is blessed with.

“We have not only seen steady numbers of nominations, but also an increase in the quality of the nominees for both individuals and organisations.

“What it tells us is that there is no shortage of very well-meaning people who are doing good work for others,” she said.

Prof Dr Adeeba added that SGHA can serve as a platform for recognising civil society organisations whose efforts could be replicated and scaled up to benefit more people.

The Impact Innovation assistant manager said environmental and wildlife protection was among the most interesting causes highlighted in the judging session.

“In MRANTI, we worked closely with organisations that provide impactful activities and programmes in line with our pillars that include conservation of the environment, community empowerment, and heritage preservation.

“I noticed that there were a number of interesting applications, especially in wildlife protection, as it is aligned with our goals in MRANTI,” said the new judge.

Social Welfare Department child protection consultant and former assistant director Vijayakumari Pillai said she was impressed with the nominees who put their hearts into helping communities in need and in return, some of their beneficiaries nominated them.

“These individuals (nominees) gave up everything and with very little resources, they did a great job,” she said.

“I just find these people incredible. They are not choosy about who and what. There’s a need and they’re doing it. I’m impressed with these unsung heroes.

“I’m especially happy that a lot of these initiatives are taking place in Sabah and Sarawak,” she added.

SGHA is an annual award by The Star and Yayasan Gamuda that celebrates everyday Malaysians who make a positive impact on society, promote unity and carry out long-term initiatives and selfless acts to help others.

This year, a total of 776 nominations were received from all over Malaysia, exceeding last year’s figure of 453 – an increase of 71%.

The accolades will be presented to three individual winners and seven organisation winners this year. Winners are also eligible to be awarded the coveted Gamuda Inspiration Award.

The winners will be announced in November.