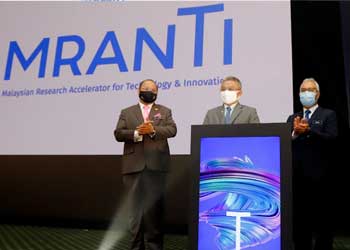 Out of the labs, into the real life

Exactly 111 years ago, Penang-born epidemiologist Dr. Wu Lien-Teh was tasked with identifying and combating the deadly pneumonic plague which broke out in China and killed over 60,000 people. To fight the disease, he invented the precursor to what is known today as the N95 mask. That this was a Malaysian invention, has largely remained under the radar, perhaps because no one wanted to be reminded of that deadly pandemic.

As Malaysia’s first Nobel prize nominee in 1935, his work left an indelible mark on how infectious diseases are controlled and managed—for he also implemented quarantines, progressive sterilisations and more, ending the Manchurian disease in under a year.

Today, humanity stands again at a critical juncture. Advances in technology have enabled us to develop and receive vaccines faster than possible before, stay informed and connect more seamlessly. As the lights dim in our physical spaces, we shift to the virtual to keep our bright sparks going; encouraging the invention of innovative solutions to solve our current problems.

We call this ‘ROI” – Return On Ideas or Return On Innovation; a term to describe the value gained from the commercialisation of an innovation or ideas. The term is inspired from the conventional Return on Investment, which refers to gains made from labour employed or capital deployed. In innovation, ROI provides a razor-sharp focus for innovators, inventors and companies to work towards the end-game: Creating tangible impact and worth from an idea, taking it from seed to tree. It is outcome and impact driven, and provides intentionality for innovators while welcoming prospective investors. Achieving ROI in this case calls for the need for speed, synergy and scalability.

GETTING FROM THE WHITEBOARD TO THE BOARDROOM
While our innovation ecosystem today brims with the potential of bright minds and inventions, it is also fragmented and perhaps unconsolidated. To be absolutely candid, our ROI is far from where we want it to be, or more importantly, where we know it can be.

In Malaysia, innovation is often hampered by a number of things – a culture that celebrates the tenets of science, lack of funding access, a fragmented ecosystem, limited resources (including skilled talent), policies that have yet to catch up to potential, and tedious bureaucracy.

While Malaysia wisely diversified from a commodities-based economy, into high-end manufacturing and services that saw us thrive through the 70s and 80s, it has yet to ride the innovation-driven growth wave necessary to transition into a high-income economy.

For example, our research institutes and higher education institutions produce amazing discoveries each year, churning out research papers and inventions in their laboratories and R&D facilities, but their ideas don’t see the light of day for years or even decades.

Fledgling startups, inventors and scientists enthused with new ideas, struggle to make sense of the various funding and support mechanisms available to them in fragmented chunks. They want to showcase how their proprietary inventions can change our lives, but lack the knowledge and resources to get from the whiteboard to the boardroom.

According to data from the World Bank, there were 1,017 patent applications from Malaysia in 2019. That was by no means the lowest in the world, but it was nowhere close to the number of patent applications made in the same year in China (1.2 million applications),  and the United States (285,113 applications). Our numbers were also only a fraction of the patents filed in the East Asia and Pacific region (1,671,876 applications). Despite our researchers producing over 120,000 research publications since 2013, with 39% of them being high-impact, we still ranked 70 out of 131 in the ‘knowledge creation’ sub-component of the Global Innovation Index 2020.

Malaysia currently spends 1% of its Gross Domestic Product (GDP) on R&D; less than half of other frontier economies like Korea, Taiwan and Singapore. According to industry research, a 1% increase in Gross Domestic Expenditure on Research and Development (GERD) – which is the total expenditure allocated to R&D by a nation – can potentially increase a country’s GDP by between two and 10%.

Fortunately, the 12th Malaysia Plan (RMK12) has set the GERD to 2.5%, while also increasing the percentage of R&D expenditure for GERD by the private sector, from 44% to 70%.

In that regard, we want our R&D to shift its focus from acquiring scientific knowledge to application into real-world scenarios. In simple words, our research needs to be geared toward solving real problems.

For this to take place, a ‘whole-of-economy’ approach is required. A study by Harvard found that the innovation capacity of a nation is largely determined by the number of scientists and engineers in the country, the stock of knowledge that the society has accrued, the public policy environment and the maturity of business clusters. As such, the RMK12 has set a target to double our current ratio of 58 researchers to every 10,000 in the labour force to 130 per 10,000, by 2025.

But more significantly, innovation requires robust interaction between these individual parts, for the innovation ecosystem really is only as strong as its weakest link. Otherwise, many discoveries remain just that: discoveries.

MRANTI: IN FAST MOTION FROM IDEAS TO IMPACT
Enter the Malaysian Research Accelerator for Technology and Innovation, MRANTI.

Formed through the consolidation of the Malaysian Global Innovation and Creativity Centre (MaGIC) and Technology Park Malaysia (TPM), this new agency will marry the hardware and the software needed to accelerate Malaysian innovation to commercialisation.

In short, MRANTI will be the glue that holds and strengthens the links between all the individual parts of our ecosystem, so that if you have an idea that could change the world, you will know to seek all your answers from MRANTI.

Nowhere in the region do you have a place as promising as Malaysia to be a hub for innovation to take flight. According to KPMG, Asia holds a leading position in the world for innovation, with more than 50 per cent of the top innovation hubs based in this region. And among cities in the Asia-Pacific, Kuala Lumpur is ranked ninth as a leading technology innovation hub.

Additionally, the Global Innovation Index 2021 ranked Malaysia third after China and Thailand for most innovative country in the upper middle-income group category, but it is our goal to be among the Top 20 Global Startup Ecosystems and to be ranked on the Global Innovation Index (GII). We want an ecosystem that can stand tall with the best in the world; an ecosystem with low reliance on government but is driven by the private sector; has a steady pipeline of domestic and international high skilled tech-talent, promotes open flow of innovation and knowledge and capable of producing Deep Tech solutions and leading-edge business models; and is able to commercialise them.

To be frank, it is about time we capitalised on our potential. We need to do the necessary for the good of all Malaysians and for our shared prosperity, shifting away from our silos.

The time is now to break our state of stasis, in order to orchestrate our recovery from the pandemic, and usher Malaysia into the future we all want to see: a Malaysia unafraid to invent, to experiment, and a nation that gives rise to game-changing innovations. In our coming series, we will expound on the strategy required to achieve these goals.