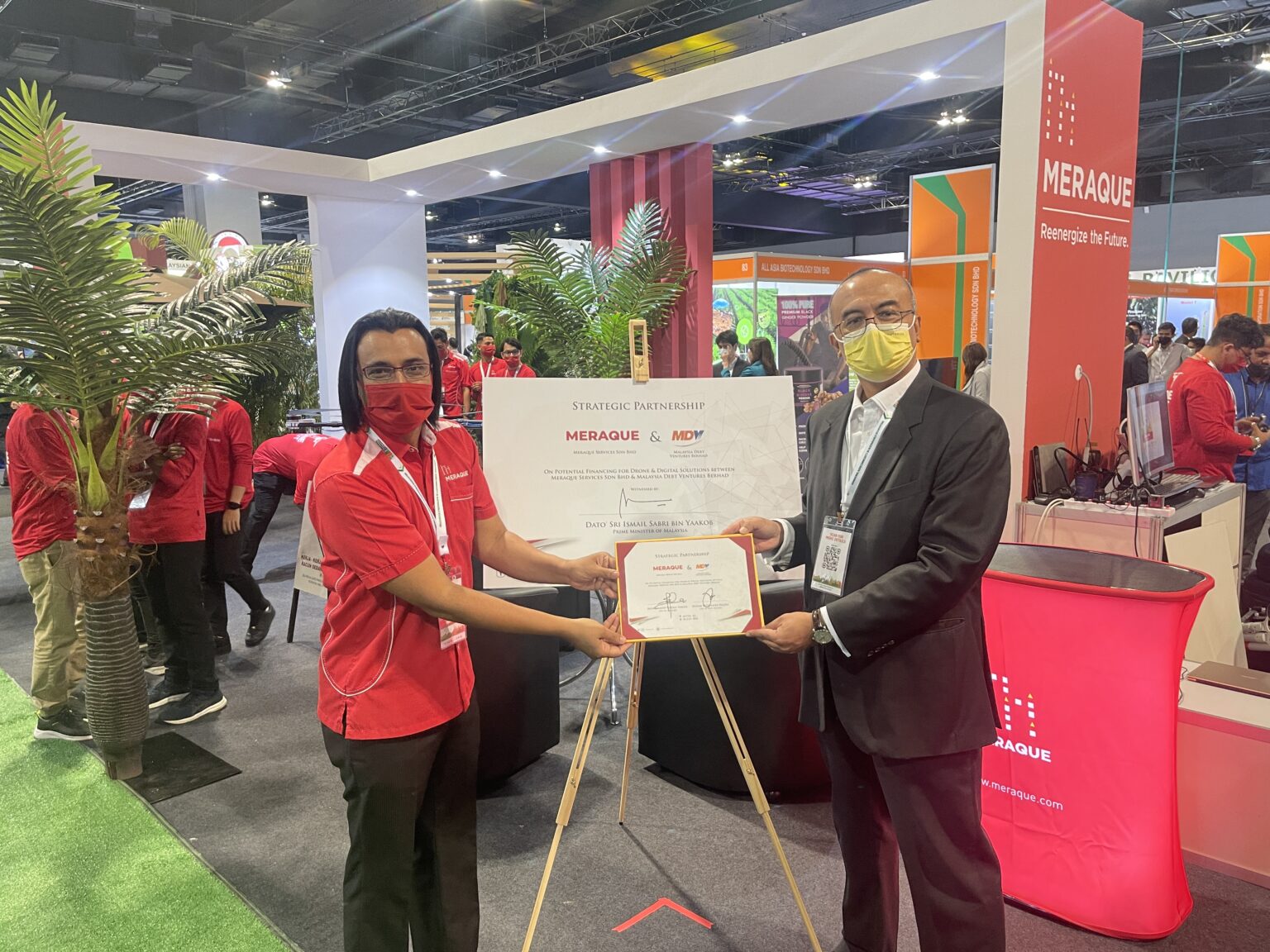 Meraque Set To Expand In ASEAN Through Partnership With MDV

Meraque Services Sdn Bhd (Meraque) has partnered with Malaysia Debt Ventures Berhad (MDV) to facilitate the growth of Meraque’s operations and expansion in Malaysia and the ASEAN region, with a key focus on the agriculture, plantation, infrastructure and telecommunication sector, through MDV’s specialised financing facility.

The announcement was made at the Malaysian International Agricommodity Expo & Summit (MIACES) 2022, which were attended by Md Razalee Ismail, Chief Executive Officer of Meraque, and Encik Nizam Mohamed Nadzri, Chief Executive Officer of MDV, and witnessed by the Prime Minister of Malaysia, Dato’ Sri Ismail Sabri Bin Yaakob, the Minister of Science, Technology and Innovation (MOSTI), Dato’ Sri Dr. Adham Baba, and Plantation Industry and Commodity (MPIC), Datuk Zuraida Kamarudin, at Meraque’s booth as one of the event main sponsors.

Commenting on the announcement, Dato’ Sri Dr. Adham Baba said, “MDV which is an agency under MOSTI is committed to supporting the government’s efforts in growing the tech start-up ecosystem holistically and sustainably by ensuring that start-ups funding capacity will be continuously enhanced particularly during the post-pandemic recovery period. As such, MDV is consistently working to increase its financing support for high potential technology start-ups such as Meraque to ensure their growth and enabling them to reach their maximum potential”.

“In the agricultural sector, for example, development and production issues have driven the need for the sector to leverage on the latest technology and innovation to boost agricultural productivity and ensure more efficiency in food production with drones being one of the potential tech solutions. The cooperation between Meraque and MDV today is consistent with MOSTI’s aim to spearhead the development of the local drone technology (DroneTech) industry and will ensure that Malaysia is able to become among the top-10 countries worldwide in drone preparedness (regulation) and drone usage (market) by 2030,” he explained.

“It is the Government’s hope that more tech service providers such as Meraque will continue to collaborate with companies in the agricultural sector to achieve the Government’s objective towards achieving sustainability in production and food security in Malaysia,” he concluded.

Md Razalee Ismail added that the potential financing from MDV will be instrumental in Meraque’s effort to increase its drone production to at least 100 drones a year, scaling its operations globally and tripling its revenue in the next 3 years.

The drone technology industry has captured a steadily rising audience, with the global drone market forecasted to achieve US$41.3 billion in 2026 according to the Drone Market Report 2021-2026.

According to a recent study by Malaysian Research Accelerator for Technology & Innovation (MRANTI), the Malaysian drone economy is expected to contribute RM50.00 billion to the GDP and create 100,000 job opportunities by 2030.

“Meraque had developed the first Malaysian Hybrid Spraying Drone in 2020 for the purpose of spraying pesticides and fertilisers at local plantation fields. Currently, Meraque controls the largest market share for drone spraying services in Malaysia and we are looking to train and hire at least 500 local talents by the end of 2023 to meet the growing demand of the palm oil plantation sector as well as other large agriculture lands such as durian, rubber, coconut, paddy field and pineapple. Financing from a tech financier such as MDV is crucial to ensure that we are able to achieve our targets as planned,” explained Razalee.

The palm oil plantation sector faces key challenges in terms of labour shortages and a dip in yield and innovative technology such as drones, robotics and automation have been used by the industry as tools to assist manual labour and increased yield by enabling operations and processes to be done faster, safer and more cost effective.

“With the support of MDV, we will be able to expand our operations especially in the palm oil plantation in Malaysia while enabling our local partners to utilise technology in their operations and provide economic opportunities for communities in the rural areas,” he said.

Commenting on the announcement, Nizam Mohamed Nadzri said that as an agency under MOSTI, MDV is committed to supporting the Government’s efforts in growing the tech start-up ecosystem holistically and sustainably by ensuring that start-ups funding capacity will be continuously enhanced particularly during the post-pandemic recovery period. As such, MDV is consistently working to increase its financing support for high potential technology start-ups such as Meraque to ensure their growth and enabling them to reach their maximum potential.

“As a technology financier, MDV possesses the capacity to support and understand the financing requirements of technology companies, hence we are pleased to explore potential partnership with Meraque to facilitate their expansion journey further,” he concluded.