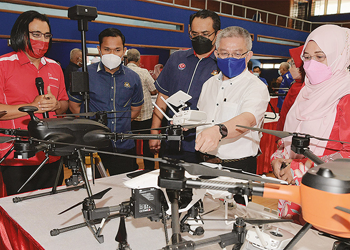 THIS is surely a corporate social responsibility (CSR) angle that Malaysian drone tech company Meraque Services Sdn Bhd can embark upon as it would not only save lives but enable notorious teenagers who seek adventure on “basikal lajak” (illegally modified bicycles) to build a better future for themselves.

After all, Meraque is already sponsoring educational drones and basic drone awareness modules to be implemented in three schools across Johor, kicking off its nationwide effort to nurture young tech talent, equipping them with skills to future-proof their careers.

Such CSR programme by Meraque is in line with the Science, Technology and Innovation Ministry’s (MOSTI) DroneTech initiative to generate 100,000 job opportunities in the local drone industry by 2030.

As part of Meraque’s ongoing local drone talent development push, the programme will help inculcate in school pupils interest in drone technology and its application.

To be delivered by the Malaysian Air Youth Club (KRUM) through extra-curricular drone club activities, the syllabus will equip, support and enhance the capabilities of school pupils through innovative drone courses and new-age skills, priming them for future employment opportunities in the drone space.

Over 7,000 students registered for the Malaysian Air Youth Club (Kelab Rakan Udara Malaysia/KRUM) from schools under the Education Ministry (MOE) and Maktab Rendah Sains MARA will stand to benefit from the modules as well.

“We believe in investing in students to inculcate a passion for drones as they will eventually be the future of this industry, and even our company. This CSR programme will enhance the level of instruction we can offer these students,” commented Meraque’s CEO Md Razalee Ismail.

“According to a recent study by the Malaysian Research Accelerator for Technology and Innovation (MRANTI), the Malaysia drone economy is expected to contribute RM50 bil to the country’s GDP by 2030. To be able to tap this growing opportunity, we as a nation must swiftly increase the number of skilled workers in the drone sector.”

This is where Meraque believe in providing school pupils with early exposure to drone technology through a safe and guided curriculum so as to equip them with the necessary skills sets to become industry-ready and eventually, expose them to career opportunities in the field.

KRUM president Azhar Selamat expects the initiative by Meraque to have a positive dent on the nation’s journey to develop a new generation with a passion for drones and an aptitude for its technologies.

“This is merely the tip of the iceberg of a long-term strategic plan that KRUM and Meraque have tailored specifically for the Youth School Drone Squad,” he opined.

“The sharing of expertise and hands-on guided syllabus will generate exposure for the participants, significantly enhancing their drone knowledge to catapult their drone career trajectory.”

Earlier this year, Meraque announced its partnership with KRUM, the Malaysian Youth Council and the Tenggara Parliament Coordinating Office to cultivate 500 youth by 2023 to meet the demands of the growing Malaysian drone industry through training and skilling programmes.

In late January, the Malaysian Young Generation Drone Technology Career Development Programme kicked off with a two-day recruitment drive, a drone exhibition and an agro-drone demo.