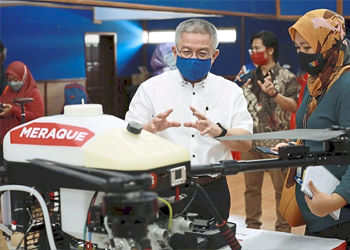 THE government has introduced a special response team that uses drones, to increase the availability of drone technology for government agencies.

Minister Datuk Seri Dr Adham Baba said the initiative was a public-private partnership model where drone operators from private companies would be roped in to work with government agencies.

The team would not only help fill in the gaps, but also operate with the authorities during emergencies at disaster sites, he said.

Critical first responders such as the Fire and Rescue Department’s air unit and the police’s air operation unit, he said, deployed drones during emergency situations.

“However, there are 359 fire stations across the country to respond to distress calls at any time.

“So there may be limitations in terms of deploying resources and assets.

“This is where PTK2Dron will come into play,” he said when contacted.

Dr Adham said the team would ensure the agencies were able to optimise their resources while the private operators could deploy their latest technological innovations to serve the public better.

He said that through the National Technology Innovation Sandbox (NTIS), the ministry was able to facilitate the deployment of commercial drones to relevant government agencies.

“This will pave the way for deploying technologies with the authorities during emergency situations.

“Through our NTIS sites, we are able to conduct more thorough case studies and encourage adaptive regulations that can spur innovation.

“It also allows more collaborations with other government agencies and authorities to help the development of the drone tech industry,” he added.

For drone companies, Dr Adham said strict certification and compliance for drone operations and multi-agency approvals were some of the regulatory challenges.

He said Mosti, through the Malaysian Research Accelerator for Technology and Innovation (MRANTI), had worked with the Department of Survey and Mapping Malaysia (Jupem), Malaysian Communications and Multimedia Commission (MCMC), Sirim, the Environment Department and the Chief Government Security Office.

“Mosti, through MRANTI, is looking at more workshops and industry engagements to further develop drone technology solutions that will be tested within a sandbox test site.

“We also welcome requests from other government agencies that require facilitation in deploying any future technology in their operations, such as drone applications, robotics or other Fourth Industrial Revolution (4IR) technologies.

“We will be able to provide further facilitation and connection to relevant industry partners to meet their requirements and needs to accelerate the deployment of these technologies,” he added.

On another note, Dr Adham said drone technology applications in the country were expected to generate more than 100,000 job opportunities worth RM50bil in gross domestic product (GDP) by 2030.

This, he said, was is in line with MRANTI’s aim to catalyse the drone tech ecosystem in Malaysia.

“We are looking into increasing the adoption of drone applications in Malaysia so that we can create more job opportunities for our local talents and increase the country’s income,” he added.