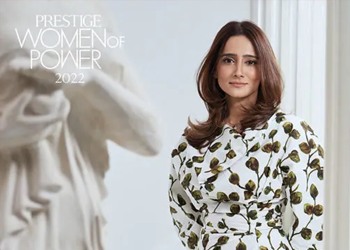 Leading the tech revolution in Malaysia, Dzuleira Abu Bakar is the CEO of the newly formed Malaysian Research Accelerator for Technology and Innovation (MRANTI), an agency that is tasked to help accelerate a secure supply of innovation for Malaysia, thus putting us on a par with, or hopefully ahead of, the rest of the technologically developed nations of the world in the near future.

The former CEO of the Malaysian Global Innovation & Creativity Centre (MaGIC) was appointed by the Ministry of Science, Technology and Innovation (MOSTI) in April 2021 to lead MaGIC’s merger with Technology Park Malaysia (TPM) to establish Malaysia’s very own Silicon Valley, and thus MRANTI – named after the world’s tallest tropical tree, Meranti – was born.

“MRANTI, like the tree, represents strength, strong rootedness, standing tall, and it provides a canvas when it is fully grown. That’s exactly what we want to do for the tech ecosystem in Malaysia. We want to help tech companies flourish and be that canvas that connects everyone, from stakeholders to business owners,” explains Dzuleira.

Having also held top positions as the Vice President at Khazanah Nasional Berhad and as the CEO of Cradle Seed Ventures (CSV), Dzuleira looks at her foray into tech as an “accidental destiny”. She found herself immersed in the untapped possibilities and soon her work began to speak for herself.

In just two years with MaGIC under her leadership, the organisation achieved RM 760 million in total value creation, impacted 26,327 participants via their various programmes, and secured five international partnerships.

As the world finally moves into the endemic stage, Dzuleira is setting her sights in accelerating MRANTI into full force, and that includes finally seeing her vision for Malaysia’s very first Artificial Intelligence Park come to fruition.

“I’m excited to see how we can transition out of the pandemic state and how that will affect businesses positively,” she says, adding that being a leader in the tech world doesn’t come without its challenges.

“It’s a fact that whatever you say or do would be closely watched. As a leader you have to make sure to set the right example, which may be an added pressure sometimes, but it moves you in the right direction.”