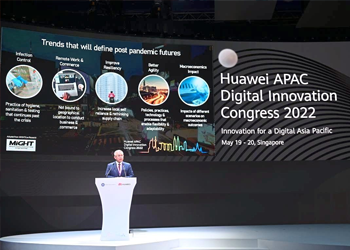 MALAYSIA is taking a multi- pronged approach to boost the digital economy, said the Science, Technology and Innovation (Mosti) Minister, Datuk Seri Dr Adham Baba, as it is expected to contribute 22.6% of the country’s GDP (gross domestic product) and create over 500,000 jobs by 2025.

During his keynote speech at the Huawei APAC Digital Innovation Congress 2022 in Singapore, the minister said that economies that are more digitally advanced tend to get a larger share of their GDP from high-tech sectors, where workers can more easily switch to remote work.

Defining digitalisation as a need, Dr Adham said the country’s Malaysia Digital Economy Blueprint (MyDigital), launched in February, will help the country achieve its aspiration to become a digitally-driven, high-income nation and regional leader in the digital economy.

The goals include improving digital literacy among the Malaysian public and equipping businesses with better tools to explore new digital revenue streams.

There are also plans for a digitally-enabled government that will provide integrated end-to-end online services that he said will be “more efficient, effective and transparent”.

He cited the Mranti Park Campus in Bukit Jalil, Kuala Lumpur, as an example of how Malaysia is attempting to leverage 5G technology.

“This will be a catalyst to launch Malaysia into the digital economy through the development of local skills and transfer of knowledge,” Dr Adham said.

First announced in 2021, Mranti, which stands for Malaysian Research Accelerator for Technology and Innovation, is the result of the merger between Technology Park Malaysia and the Malaysian Global Innovation and Creativity Centre (MaGIC).

Mranti is constructing the first AI park in Malaysia on a 300-acre (121.4 ha) plot of land that would serve as a platform for the development of AI solutions.

The site will also house the DroneTech Centre of Excellence called Area 57, which will focus on research.

The facility, which was first announced in March, is expected to give industry players 5G network infrastructure and tools to speed up the development of new technologies.

Sustainability is also at the heart of the digitalisation agenda, said Dr Adham, claiming that new technologies will be deployed to tackle challenges brought about by climate change and other issues.

“We have to see sustainable development goals in a bigger picture to support planetary health, which has become more important than ever before,” he said.

The ministry, which will lead the formulation of an action plan, has kicked off a pilot project – the Digitalisation And Internet of Things (IoT) Programme For Biodiversity – which will be managed by the Academy of Sciences Malaysia. The project will allow the government to explore technologies such as robotics, drones and satellites for mapping forests.

“The application of these technologies not only eases up manpower needed for forest management, but will also provide more precise and accurate data for research and decision-making, while strengthening the conservation of our natural assets,” he said.

“For example, policies like Digital Indonesia, My Digital in Malaysia, Digital Hub in Thailand, and South Korea’s Digital New Deal are accelerating the deployment of digital infrastructure across the region and laying strong foundations for a robust digital economy,” he said.

According to Hu, Asia Pacific has come a long way in making technology more accessible.

“According to the ITU (International Telecommunication Union), mobile coverage in the region has almost reached 100%.

“This is an incredible achievement. Just 10 years ago, some Asia Pacific countries did not have any 3G or 4G infrastructure at all.

“Now, GSMA estimates that, by 2025, Asia Pacific will have 1.2 billion 5G connections,” he said, noting that challenges will include having to manage massive amounts of data.“In 2022, we will increase our support for a green and digital Asia Pacific by promoting digital infrastructure, low-carbon development, and digital inclusion,” he said.

Simon Lin, the president of Huawei Asia Pacific, said that as digitalisation speeds up, there will be a high demand for talent.

To address this, the Huawei Asean Academy and Seeds for the Future are working with partners to train 170,000 local talents.