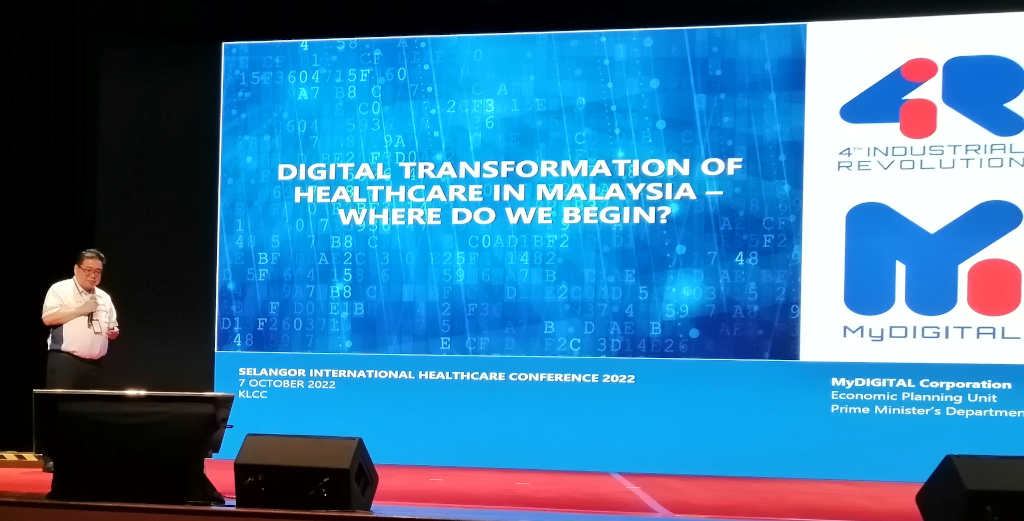 DIGITAL TRANSFORMATION OF HEALTHCARE IN MALAYSIA – WHERE DO WE BEGIN

Fabian who came from the Ministry of Health, now is Chief Executive Officer of MyDIGITAL Corporation under the Economic Planning Unit, Prime Minister’s Department.

His mandate is to drive change management and ensure the successful delivery of the Malaysia Digital Economy Blueprint (MDEB). MyDIGITAL also serves as the main secretariat for the National Digital Economy and 4IR (4IR Industrial Revolution) Council (MED4IRN) chaired by the Prime Minister every quarter.

Both the MDEB and the National Fourth Industrial Revolution (4IR) Policy were launched in 2021 by the Prime Minister and can be downloaded from the Economic Planning Unit’s website.

Whilst not specifically related to healthcare, according to Fabian, these documents provide Malaysia with a foundation to be a leading digital nation in the region, as well as sets of initiatives and strategies to get there, as well as targets to achieve.

MyDIGITAL was established to draw up the policies introduced in documents such as MDEB and the National 4IR Policy.

Since these documents were drafted before the COVID-19 pandemic, they set a target of 20.6% contribution to GDP by 2025 but due to the acceleration of digitalisation during the pandemic, this target was achieved by 2020.

It was also targetted to achieve RM70 billion in terms of digital investments in Malaysia by 2025 but this target was achieved as of June 2022.

Under the MED4IRN Secretariat are six clusters – i.e. ministers responsible for the economy, talent, infrastructure, exciting, emerging technologies, and also government transformation, with secretariat serving as the steering committee which established a committee that aligns national policies with states in Malaysia, as some states such as Sarawak have their own digital economy blueprint.

The Secretariat comprises no more than 20 people, mostly secondees from various backgrounds, including civil servants, regulators such as the Malaysian Communications and Multimedia Commission, the Malaysian Investment Development Authority, as well as people from the private sector, including technology companies and telcos who manage problems, intervenes when necessary, assists with change management and implementation, organise seminars and so forth.

“We work closely with the private sector, and next year (2023), we will house the World Economic Forum’s (WEF’s) Centre for 4IR, the first in South-East Asia”, said Fabian.

On transforming the healthcare system in parallel with Malaysia’s digital transformation, the Multimedia Super Corridor (MSC Malaysia) initiative launched in 1996 introduced health-related initiatives such as telemedicine and lifetime health record as what are called “Flagship Applications”, which were followed over the years by initiatives such as Hospital Information System, Health Information Exchange, Open Data Initiative and so forth.

Across Asia, the pandemic provided an opportunity for an estimated 32% growth in digitalisation in average value.

In Malaysia, a survey conducted by PriceWaterhouse Coopers last October (2021) which looked at consumer expectations and in the next couple of months, and increase in interest the use of wearable devices, apps, insurance, tele-consultation, pharmacy and digital therapeutics, according to conversations with healthcare industry players.

“Healthcare is a very regulated industry. Are we ready for our regulations. Do they cater for services like telemedicine right now,?”, asked Fabian rhetorically.

“When were the practices visible, then some clarification is needed on what our online medical services, such as in the use of robotics in surgeries, which are not done my humans any more?

“We have regulations that cater to this, then how do you define smart health technology then you want people to be safe and secure and confident how we take into account cyber security, how do we take into account data transfers within the country or outside the country, so how does one actually transfer medical data from one country to another, then with Malaysia embarking on a Digital National Identification, how does that impact patients? And, they also talk about digital consumer rights.

“Another issue is the compatibility of different data structures use by different healthcare facilities’ information systems, which need to be taken into account”, Fabian added.

Whilst few of the 192 initiatives under the Digital Economy Blueprint and the National 4IR Policy combined are healthcare-related, some of them are driven by the Ministry of Health (MoH), and as for a technology-adoption framework, there needs to be a common medical data framework, such as a Malaysian health-data warehouse, blockchain-based technologies and solutions, national standards and guidelines to standardise data formats across the supply chain and services, guidelines for healthcare robotics and drones, and the use of emerging technologies to improve service delivery.

Some of the initiatives directly related to healthcare are in both the above documents, whilst others may not be driven by the MoH.

A lot of data will be stored in clouds (data centres), so connectivity is of paramount importance, and under Malaysia’s JENDELA (National Digital Fabric) plan is to achieve 100% broadband coverage of populated areas 2024.

Also, under MyDIGITAL’s  new mandate, besides water and electricity, broadband connectivity must also be available in new housing estates, and since such regulation involves the 13 states of Malaysia, they will have to amend their local laws, by-laws and regulations to match these requirements, and 10 states have already ratified these requirements.

With regards cross-border data and the Digital National Identification and facial recognition, the Ministry of Home Affairs and the National Registration Department have already begun work on addressing these.

As for legislation, cybersecurity if very important to protect patient data from being leaked, as well as issues related to the ethical use of technology, so there have to be a framework, and these are some of the initiatives already being undertaken by the MoH.

The MoH was the first ministry to come out with an Open Data initiative. Then there is sandboxing work on new technologies being done by MRanti (a merger of Technology Park Malaysia and MaGIC), and it is possible that five hospitals will be involved in 5G hospital trials, according to what hae been announced.

Also to be looked into are 5G hospitals in the United States of America, as well as other initiatives which may not directly relate to the MoH.

MyDIGITAL used to chair a working group which found that 700 rules and regulations need to be amended, so they are proposing an Omnibus Act which would allow for speedy transformation.

This year, the Ministry of Science, Technology and Innovation (MoSTI) proposed a national robotics roadmap, and the MoH has to come out with its own robotics framework. Also needed is a Malaysian drone technology action plan. These two documents were already approved by the Council.

Whilst waiting for all this to happen, MyDIGITAL introduced what it calls a catalytic projects concept, where it takes digitalisation projects that the private sector has invested and put money in, which is not something new.

For example, two days earlier, MyDIGITAL ran a workshop with CISCO, which has a programme called Country Digital Adoption Solution, which funds projects, whether it’s public or private, to ensure rapid digitalisation in the country.

This involved 14 participants, from the public sector, private sector, and also use in hospitals, and they came up with at least three use cases.

After privatising these projects, MyDIGITAL will track their progress and identify all the pain points and try to resolve them.

Just like in the digital economy in general, the digital healthcare transformation involves six areas which need to addressed – namely:-

1) A digital mindset in the transformation of public sector and education for the private sector;

2) A more supportive ecosystem for local entrepreneurs and startups to come up with digital solutions for healthcare, which needs to be more open with data sharing, so they can offer effective solutions based upon data analytics, whilst at the same time have features which protect data privacy;

3) Total connectivity, without which these solutions will be unable to serve their intended purpose;

4) Very important, is a future-ready workforce, are we ready, are we trained, not just the professionals but those people maintaining those people doing all the work in the workforce or in schools. There’s a WEF report on the future of jobs, which says that about 85 million people will be displaced by technology by 2025, whilst at the same time 97 million new jobs will be created, so there’s a gap of 12 million which needs to be filled;

5) The problem of the digital divide between the haves and have-nots, so the latter have to be reached;

6) The need to build trust and ethics in using data. Essentially, it’s about selling services, otherwise nobody will adopt them.

“These are the six key areas which need to be address in this country”, Fabian concluded.