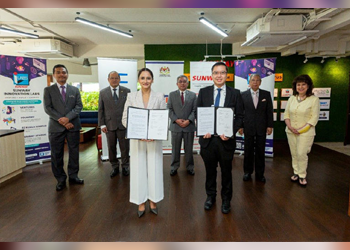 He pointed out that the creation of a smart city is one of the effective urban management techniques, through applications and technologies to solve urban problems, improve the quality of life, and promote economic growth.

Speaking at the launch ceremony of the smart city pilot sandbox project, Aham Baba said that according to the Second National Urbanisation Policy Report, the number of Malaysians living in cities is expected to increase from 20.29 million in 2010 to 27.3 million by 2025.

"Our country estimates that more than 70% of the population currently lives in urban areas."

He said the ministry, through its agency, the Malaysian Accelerator Research Centre for Technology and Innovation (MRANTI), had signed a Memorandum of Understanding (MoU) with Sunway Innovation Labs (iLabs) to develop the initiative through the National Innovation and Technology Sandbox (NTIS). Smart City Sandbox.